A quote often attributed to Jim Condon claims that “There’s nothing as useless as a radio source”. Within our group we therefore work on several aspects of Multi-Wavelength “Data Fusion” to make the most of radio surveys carried out with MeerKAT and other SKA pathfinders and precursors in the context of data obtained at other wavelengths.

The Spitzer Data Fusion Project : The Spitzer space telescope (2003-2020) revoluzioned mid-infrared astronomy carrying out the first deep and wide surveys at these wavelengths.

However, the multi-wavelength data, in particular at optical and near-infrared wavelengths, required to fully exploit the Spitzer data has only become available over the last decade or so.

Our group has played a leading role in reducing Spitzer data as well as in assembling and homogenizing data over some of the most extensively studied sky areas (e.g. ES1, CDFS, XMM-LSS, Lockman Hole, EN1, EN2, Bootes, XFLS). This has allowed us to gain important insights into Galaxy and AGN evolution not only with Spitzer, but also with Herschel and Radio continuum data.

The Herschel Extragalactic Legacy Project (HELP) : The Herschel Space Observatory (2009-2013) extended Spitzer coverage and sensitivity in the far-infrared and sub-millimetre wavelength range. HELP has been an important development of Herschel extragalactic surveys and of the Spitzer Data Fusion project, funded by the European Commission and by the South Africa Department of Science and Technology to provide datasets and tools to make Herschel extragalactic surveys easy to use. HELP data products are available on HeDaM

The VST Optical Imaging of the CDFS and ES1 (VOCE) Survey : The MeerKAT International GHz Tiered Extragalactic Exploration (MIGHTEE) is a MeerKAT Large Survey Project to create deep images of the extragalactic sky to explore the cosmic evolution of galaxies. As part of our involvement in the MIGHTEE radio source cross-identification effort, UWC has undertaken an optical imaging survey of two of the MIGHTEE fields. VOICE has obtained deep optical imaging in the ugri bands over 4 square degrees of the CDFS field, and will hopefully do the same over 4 square degrees of the ES1 field if our extension proposal is successful. This will allow us to characterize the radio sources detected by MIGHTEE ion much greater detail.

JVLA Stripe 82 Snapshot Survey : The Sloan Digital Sky Survey’s Stripe 82 region was observed in a hybrid CnB configuration using the Jansky Very Large Array (VLA), in Heywood et al. 2016. This resulted in a catalogue of ~12,000 radio sources, over an area of 90 square degrees with fluxes down to a limit of 70 microJy. Radio data from this was cross-matched to optical counterparts with spectroscopic and photometric redshifts, observed as part of SDSS survey, to produce a cross matched sample of 6000 objects (see Prescott et al. 2018 and Whittam et al. 2018).

The XMATCHIT Radio Source Visualization & Identification Code : XMATCHIT was developed at UWC (Prescott et al. 2018) to visually inspect, cross match and classify radio sources. An updated version of the the XMATCHIT code has been developed for the MIGHTEE survey, which makes extensive use of Jupyter Notebooks running on the IDIA research cloud. 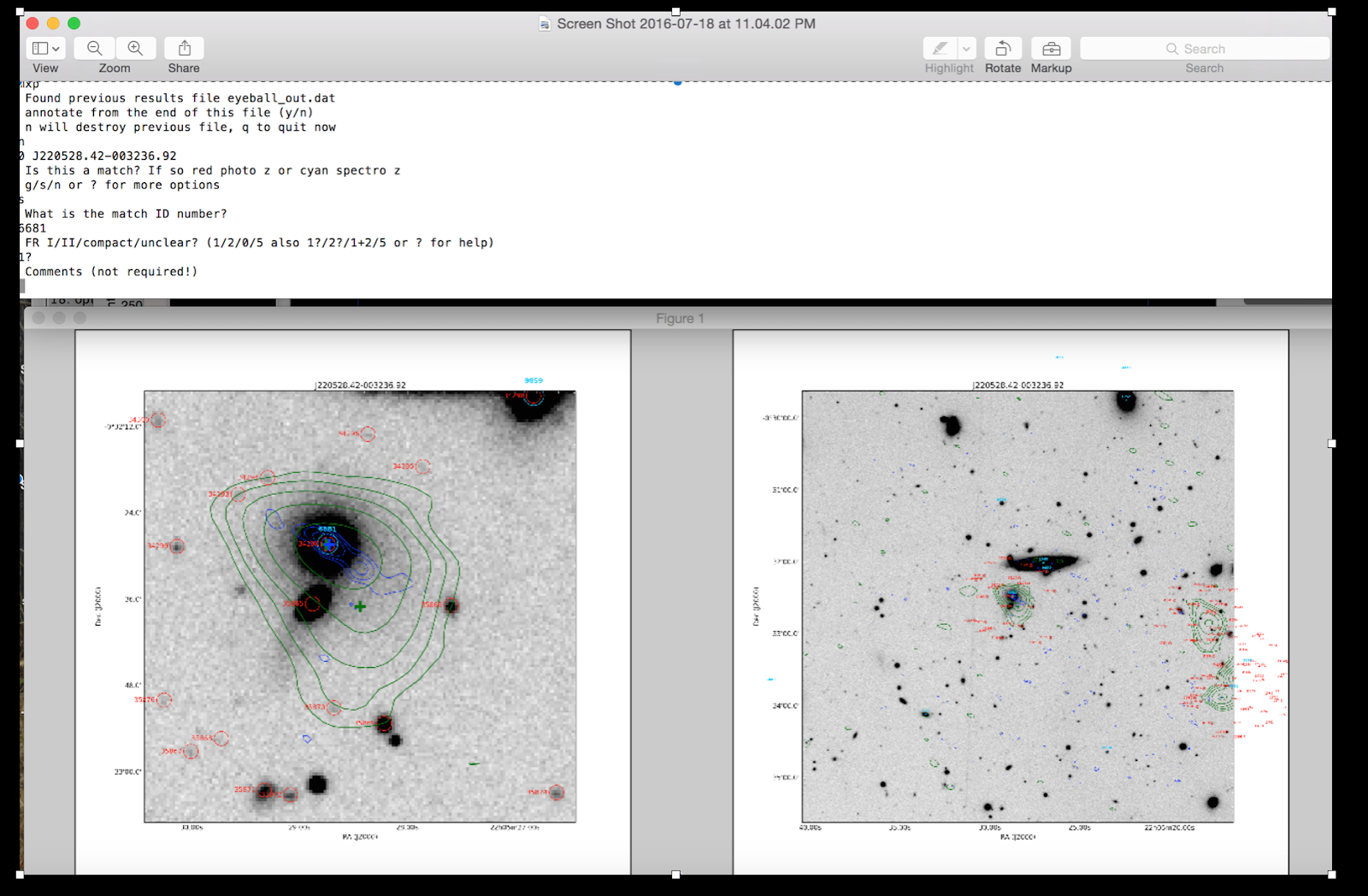 Herschel/SCUBA2/ALMA Surveys, Radio Source Identification and the Far-Infrared/Radio Correlation : It has long been known that the Far-infrared (FIR) and radio luminosities of star-forming galaxies are bound by a tight correlation over many orders of magnitude in spatial scale, luminosity, gas surface density, and photo/magnetic field density. Although in the simplest “calorimetry” models, the physical explanation for this FIR-radio correlation is that their emissions are all linked to short-lived massive stars, recent work shows that the radio spectral properties of FIR-luminous galaxies are different from those of main-sequence galaxies. Our group has been involved in some of the most ambitious far-infrared, sub-millimetre and millimetre surveys with instruments such as Herschel/PACS-SPIRE, JCMT/SCUBA-2 and ALMA. We have developed techniques to ‘deblend’ single-dish observations (Hurley et al. 2017) and determine the most likely counterpart of single-dish observations using interferometric observations of a subsample (An et al. 2018). We plan to adapt and apply these techniques to study the Far-Infrared Radio Correlation of FIR-luminous galaxies using deep radio continuum surveys with MeerKAT, GMRT and LOFAR.